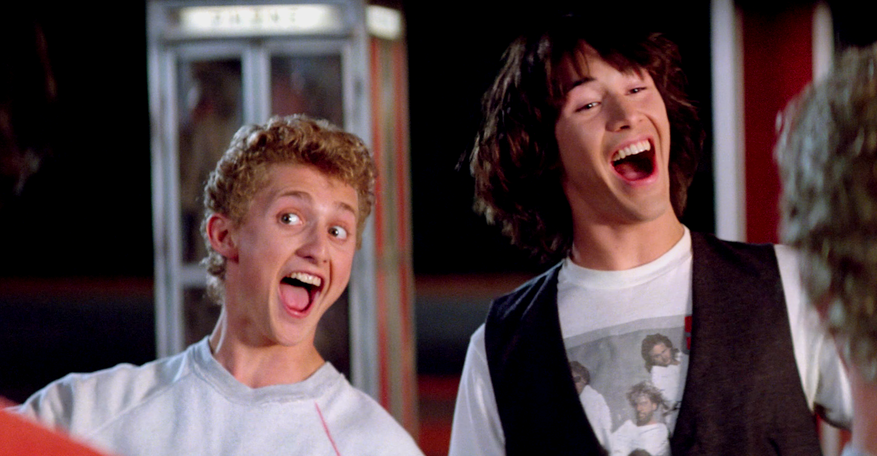 The Most Excellent Day of the Year!

Common festivities include watching the Bill & Ted films (Bill & Ted's Excellent Adventure, Bill & Ted's Bogus Journey, Bill & Ted Face the Music) and cartoon (Bill & Ted's Excellent Adventures), listening to the soundtracks, holding a Bill & Ted screening party with friends and family, hosting a public Bill & Ted-themed event, introducing people to the franchise, wearing Bill & Ted-themed clothing, sharing quotes, photos, fan art and appreciation for the franchise on social media with the hashtags #BillandTed and #BillandTedDay, cosplaying as characters from the franchise, playing air guitar, and generally being excellent to each other. One of the highlights of the day are the many members of the cast and crew who celebrate with fans, online!

Over the years, public Bill & Ted Day events have been independently hosted at various places around the world, and even an entire Island, in New York! In 2020 alone, more than a hundred thousand people around the world participated online, which coincided with the release of the first trailer for Bill & Ted Face the Music! That day, the #BillandTedDay hashtag became the most engaged promoted trend on Twitter, ever!

It correlates with the time frame that the events of the first film occur - at the end of the school year. In 1988, when the film takes place, June 9th was a Thursday - which is when San Dimas High School usually has their final exams. In real life they've had them on June 9th several times since, including in 2022!

Image: Fandango Now
Plus, San Dimas, California uses the month/day/year format when numerically writing a date. Thus, June 9th would be 6/9, the number Bill & Ted are thinking of when they meet themselves in front of the Circle K. WHOA.
NO MATTER WHERE YOU ARE, BE SURE TO JOIN US ONLINE NEXT YEAR, AND CELEBRATE THE MOST TRIUMPHANT BILL & TED DAY, YET!
Public Bill & Ted Day Events 2023:
Over the years, independently-organized Bill & Ted Day events have taken place around the world! Want to host one in 2023? Let us know the details, and we may feature a link to it on this page! (Please note: to publicly show any of the three films, even if it's a free event, you MUST acquire a license to do so. In the United States, this can be done by visiting Swank.com, selecting the type of venue, and typing the names of the films and selecting each. In other territories, please research where to acquire a license to show the films. All independently-organized events are the sole responsibility of those who are hosting them.)
Copyright 2022 BillandTedDay.com